Pledge to SAVE the EARTH.

We at DHANAK not only aims to make the future of kids brighter by providing them education but also by making earth, a better place to live for them.We don’t realize the fact that earth is also our home and we have to keep it clean just like it.

So, we took the initiative to celebrate the International Environment Day this year by planting around 80 trees across Vasundhara area of Ghaziabad. Everyone from elderly to younglings came forward and helped us in our initiative. When planting trees we saw the how poorly government bodies have maintained the parks around our area, we found tons of plastic buried under the soil which we had to clean to plant the trees. END_OF_DOCUMENT_TOKEN_TO_BE_REPLACED

The United Nations, aware that the protection and improvement of the human environment is a major issue, which affects the well-being of peoples and economic development throughout the world, designated 5 June as World Environment Day. The celebration of this day provides us with an opportunity to broaden the basis for an enlightened opinion and responsible conduct by individuals, enterprises and communities in preserving and enhancing the environment. Since it began in 1974, it has grown to become a global platform for public outreach that is widely celebrated in more than 100 countries. END_OF_DOCUMENT_TOKEN_TO_BE_REPLACED

The World Conference for the Well-being of Children in Geneva, Switzerland, proclaimed June 1 to be International Children’s Day in 1925. It is usually marked with speeches on children’s rights and well being, and other events involving or dedicated to children. 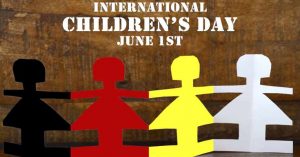 But are these speeches and events really helping to improve the lives of children ?

More than half of the world’s children are being robbed of their childhoods as a result of conflict, poverty and gender based violence, a new report from charity Save the Children has found.